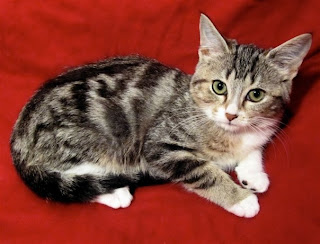 Delilah was rescued from a feral cat population October 14th, and adopted November 8th. She is now enjoying her new indoor life style. She was never really a street cat in her eyes. This delecate little girl would have never made it on the streets. She is still adjusting to living with us humans but so far has gotten pretty comfortable with the overdose of affection. She is a little timid, but will a little back rub she comes right out of that shell! and oh boy can she puurr! She is one little ball of a lotta love and now has found someone to share it with!
Posted by Eleven Eleven Animal Rescue at 1:43 PM No comments: 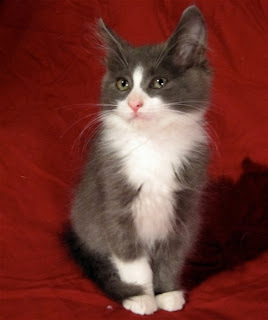 Penguin was rescued from the outdoors after being borne to a stray mother August 30th, and adopted November 10th. He was one of 15 stray kittens from the population we are trying to place. This little charmer is such a handsome little man. He is a little guy and much smaller than any of his siblings. If you have ever heard the expression "Lap Cat" then you know what i am talking about, this guy is the definition of a Lap Cat. Oh does he purrrrr, he purrs and purrs and... purrs. We are happy to say he has now beed adopted and sharing his abundance of love with his new home.
Posted by Eleven Eleven Animal Rescue at 1:39 PM No comments: 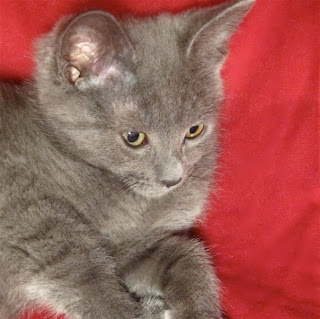 Pepper was rescued August 30th and adopted November 8th. She was rescued after being borne to a stray mother. She was one of the first kittens we were able to catch. She came is terrified of humans, but with just a little socialization she came around, and blossomed into a whole new kitty. We are happy to say she will now enjoy her life in the comfort of her new home.
Posted by Eleven Eleven Animal Rescue at 1:30 PM No comments:

This week Snata Paws Drive was launched, and they choose 6 rescue from around the world to donate to. We are proud to say that Eleven Eleven Animal Rescue was chosen! After the nomination by Montreal Critters.

while they are waiting for their forever home.

To contribute, or read more about them go here: www.santapawsdrive.com
Posted by Eleven Eleven Animal Rescue at 1:00 PM No comments:

Party for the Pussies 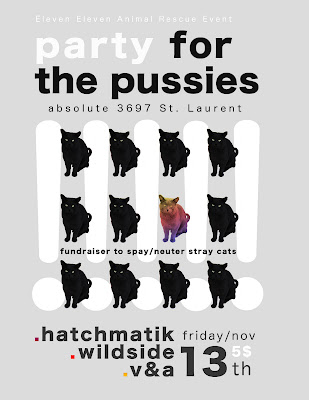 As many of you may know, last night we had our highly anticipated party; Party for the Pussies! Big thanks to everyone who came out and supported the cause!
Also thank you to everyone else who supported in other ways.
Special shout out to Richard Goulet for putting the posters up at his stores; Cruella Boutique and Kitsch'n Swell.
Thank you to the volunteers; Josh, Amanda, co-event planner/DJ Kevin, DJs Julien and Francis.
Posted by Eleven Eleven Animal Rescue at 12:38 PM No comments: 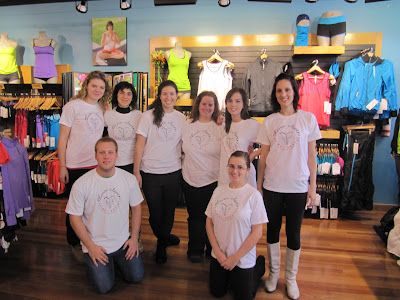 As most of you know we broke grounds Nov. 8th and held the first adoption event at Lululemon Athletica on St. Catherines this past Sunday. It was a huge success! People came and learnt about the rescue while enjoying the company of our kittens, puppies and rabbits. Penguin has a few  potential homes, Hook has two potential homes, Zoro the rabbit had a few interested people, and we are VERY happy to say Delilah and Pepper were adopted!
We would like to say a HUGE thank you to Kaeleigh Doherty for making contact with us in September, taking interest in the rescue and making this happen! Along with all the other Lulu's of the store who were all a great help and we loved their positive vibe. It is a great store, with great clothes and an amazing staff.
Thank you to the volunteers; Natalie Ross, Leigh Symington and Taylor Dickson,  who spent thier day off helping out! Also thank you to everyone who took the time out of their day and came to support us!
If you missed out, don't worry! We hope to throw another adoption day there closer to Christmas!
(Click here to see the Facebook Album)
Posted by Eleven Eleven Animal Rescue at 7:51 AM No comments:

Nov 6th 2009, The House of Commons passed the motion for a Universal Declaration on Animal Welfare, and to everyones suprise.. it passed with unanimously with all-party support!
At 2:03pm that day the house was adjourned untill Monday November 16, 2009 at 11 a.m.
Here are some notes from the transcript:
"That said, I believe that the House of Commons' adoption of the spirit, values and beliefs outlined in Motion No. 354 supercedes debating forums in which it is delivered. I therefore agreed to the hon. member's amendment. I also believe this amendment and subsequent debate demonstrates a healthy cooperation among all parties in the House. Such cooperation is increasingly less frequent these days. However, I am very pleased that the motion may serve as a small example of what a spirit of cooperation can achieve in our collective support for a universal declaration on animal welfare.

Animal welfare is a sensitive issue. Not all of us in the House may agree on the best way to go about enacting laws to properly protect animals, but we all believe they should be protected. There are competing points of view, those of pet owners, farmers, developing nations and the rights of our native peoples. At the heart of it, the universal declaration on animal welfare is a start as it demonstrates our belief that animal welfare is essential.

As I mentioned in my previous speech, the declaration is an agreement among people and nations to recognize that animals are sentient, suffer, have welfare needs, and to ultimately end animal cruelty worldwide. The declaration will be structured as a set of general principles that acknowledge and emphasize the importance of animal welfare. The purpose of these principles is to encourage all nations to put in place or enhance existing animal welfare laws in standards.

The declaration is supported by a growing list of governments from countries around the world including all 27 members of the European Union. There is also a great deal of support from the public. Thousands of Canadians have signed petitions in support of a UDAW. Many of these petitions have been introduced in the House of Commons. The declaration is actively supported by Canada's foremost animal protection organizations including the World Society for the Protection of Animals.

The implementation of the declaration is an important step and will act as a catalyst for change in the following ways: by raising the status of animal welfare as an international issue; by encouraging those in industries which utilize animals to keep their welfare at the forefront of their policies and practices; and by inspiring positive change in public attitudes and actions toward animals.

I am heartened by the tone of the debate that has transpired. The declaration will be a key toward improved animal welfare legislation worldwide and a step closer to ending cruelty to animals globally. This first step is only one of many in a long road, but it is a critical one, one we must take for this extremely important cause."

Posted by Eleven Eleven Animal Rescue at 4:50 AM No comments: